Rachel Uffner Gallery is pleased to present Buried and Deep, a two-person exhibition featuring new paintings and sculptures by Erica Mao and Robert Zehnder. Though different in their stylistic approach, both artists explore the narrative potential of landscape through complicated visions of hostile natural environments. Influenced by their respective upbringings in suburban towns, Buried and Deep centers around their shared interests in regional mythologies, memory, and tales of salvation and survival specific to the American experience.
Throughout her practice, Mao perpetuates ambiguous and unfounded stories, much like the way children come up with folklore about abandoned houses or empty lots. In a series of visceral, atmospheric, paintings, Mao depicts pseudo-biblical compositions of desolate, forested, landscapes, smoldering with fire or leveled by flood. Her scenes are populated with enigmatic figures on epic journeys in search of shelter. Mao is continuously experimenting with new ways of presenting the human form within landscape and often blurs the boundaries between bodies and earth.
Deserted homes, crooked structures, and hallowed caverns loom suspiciously in the background of Mao’s paintings. These forms are brought to life in a series of dark, earthy ceramic sculptures which Mao produced at dollhouse scale. The sculptures sit atop low-to-the-ground pedestals, designed by Mao and Zehnder for the exhibition, that together reference residential cul-de-sacs, a hallmark of suburbia. Just as Mao’s sculptures are meant to be viewed from above, her paintings are rendered from a slightly elevated perspective, adding a mediary lens of suspense between the viewer and imagery.
In contrast to Mao’s character-driven narratives, Zehnder’s smooth paintings of undulating landscapes are devoid of human subjects. Instead, the earth becomes the protagonist, and Zehnder depicts environments that have succumbed to the effects of industrial civilization. Zehnder cites the anxiety and uncertainty seen in the landscapes of artists Thomas Hart Benton and Grant Wood, as well as the overwhelming power and spirituality of the natural world as depicted by The Hudson River School painters.
Despite the arduous darkness of this projected dystopian destiny, swaths of green grass, babbling streams, and bulbous shrubs emerge amongst the lifeless earth in Zehnder’s paintings. The artist’s cautious optimism portrays our planet in a state of adaptation, imploding and rebuilding, suggesting the possibility of a new era of fertility.
Zehnder’s compositions are quilt-like, made up of multiple horizon lines, stacked and layered through a forced frontal perspective. Rejecting visual hierarchy, Zehnder deliberately forces the viewer's eye in frenetic patterns across the surface. This movement mirrors our attempt to revive a fleeting memory, too distant to accurately remember.
Both Mao and Zehnder favor a color palette more closely related to CGI than the natural world. They employ descriptive techniques akin to media like true crime podcasts or horror movies, which depend on the familiar yet position the audience distantly enough to allow for subjectivity and speculation. While their imagery is undoubtedly futuristic, both mix the nostalgic with the contemporary, and Mao and Zehnder each suggest paths towards a new pastoral idealism in the wake of natural disaster and promised technological utopia.
Buried and Deep is organized by Gallery Director and Director of Sales, Rebekah Chozick, who will be programming the Upstairs Gallery going forward.
Erica Mao (b.1994, Maryland) received a BFA from Parsons School of Design, NY in 2016 and an MFA from Columbia University, NY in 2020. Mao’s first solo exhibition, Born from Earth, is on view at the Rubber Factory, New York, NY, through January 9, 2022. In addition, she has exhibited at venues including the Wallach Art Gallery, New York, NY; Field Projects Gallery, New York, NY; and Steve Turner Gallery, Los Angeles, CA, to name a few. Mao lives and works in Ridgewood, Queens.
Robert Zehnder (b. 1992, New Jersey) earned a BFA from The School of the Art Institute of Chicago in 2015. Zehnder’s work has been included in exhibitions at venues including Rachel Uffner Gallery, New York, NY; Mrs., Maspeth, NY; Laura, Chicago, IL; Jacket Contemporary, Chicago, IL; Spider Gallery, Wichita, KS and the Ox-Bow School of Art, Saugatuck, MI, to name a few. Zehnder’s first New York solo exhibition will open at Mrs., Maspeth, in September 2022. Zehnder currently lives and works in New York, NY. 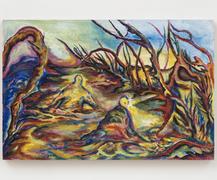