an exhibition of new paintings and drawings by Shara Hughes. Spanning both the upstairs and downstairs exhibition spaces, this will be the artist’s first solo show with the gallery.

The exhibition consists of a series of abstracted “invented landscape” paintings, presented in the downstairs gallery. Utilizing an analogous organic silhouette as the compositional starting point for each canvas, Hughes employs a new approach in this series, exploring the multitude of ways in which one object or idea may be perceived when expressed within different contexts. Playing with the boundaries between the real and the imagined, Hughes renders her paintings as portals into unique universes that beg for deeper discovery.

Pours of primary colored acrylic melt into pastel, palette knife-streaked enamel, imbuing motion into the waterfall that we peak through. In a reflection on the way in which life today tends to be viewed through camera rather than the eye, a swirling, psychedelic flower field unnaturally brings into the frame both central and peripheral vantage points. The ominous root of a giant tree creeps curvaceously around heavily impastoed leaves, leaving us to wonder if the turquoise shrubs below will be under attack or embrace. Suns and moons perforate each canvas, serving as legend to these mystical, sometimes chaotic, worlds.

In the upstairs gallery, by contrast, hangs a selection of sixteen drawings from a series completed over the past three years. The works on paper, made with crayon, marker, oil, and pastel, are a wholly separate practice from the paintings, created in the artist’s intimate home space. Purposefully composed as Hughes’ mind is preoccupied with other thought, she allows her subconscious to be at work on the page, enacting shapes and colors that she might not otherwise choose to pair. This sense of freedom becomes mirrored in the larger canvases, which, too, push investigation of the subconscious, both on the part of painter and viewer. A forthcoming monograph of sixty-eight drawings will be published in tandem with this exhibition. 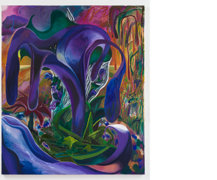