Rachel Uffner Gallery is pleased to present Roger White’s third solo exhibition with the gallery. White’s first show, in 2008, inaugurated the gallery’s original space on Orchard Street; this show will span both floors of the gallery’s exhibition space, with paintings in the downstairs gallery and watercolors upstairs.

The show is untitled. I might have gone with Drommet Red, after an imaginary color in a suspense novel that Adorno mentions in Aesthetic Theory. Then I thought of calling the show Return to the Return to Order, a little art-historical joke about the state of painting in our current, vaguely Weimaresque moment (too grim). I also briefly considered Bleak Peak in honor of my studio, an apartment above a garage in a farmhouse in Vermont. Mountain views, and the smell of cows. My landlord’s incessantly barking dogs roaming across an ice-covered field in search of the perfect spot to defecate.

Just the other day I remembered something that happened in 2003 or 2004, during an unusual (for me) bout of insomnia. At about three in the morning on the fourth or fifth of these sleepless nights, I turned on my television and discovered all sorts of new channels I’d never seen before—someone flipped the wrong switch at the cable company. I surfed through reality shows and bad, late-night movies and landed in the middle of a documentary about Bonnard. The camera was gliding through Bonnard’s beautiful villa, Le Bosquet, in the French Riviera, and then various Bonnard paintings were superimposed over the parts of the estate they depicted, the dining room, the bathroom, an open foyer with a metal railing, while a male narrator expounded in French. The walls of Le Bosquet were white, of course, and I was struck by the idea of an aged Bonnard hallucinating, or projecting, his overripe, otherworldly colors onto the walls of his home, much in the way that he hallucinated or projected his late wife, Marthe, into the bath for his last portraits of her. Writing this down now, though, I wonder if I dreamt the entire experience.

What else can I say about the show? There are two portraits of science fiction writers (J.G. Ballard and Samuel R. Delany, respectively), a large picture of a pane of glass, several of round mirrors under different lighting conditions, a painting of some mushrooms grown from a kit, a big one that’s just the corner of a room painted over and over. Possibly a few more—there are still some painting days left until the opening, so who knows?

Roger White has recently been included in shows at Peter Blum Gallery (NY, NY), Grice Bench (Los Angeles, CA), and Mitchell-Innes and Nash (NY, NY). He has exhibited at The Suburban in Chicago and was included in the American Academy of Arts and Letters Invitational in 2011. He is the co-founder of the art journal / publishing imprint Paper Monument and author of The Contemporaries (Bloomsbury, 2015). 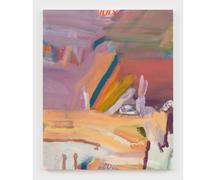