Rachel Uffner Gallery is pleased to present a booth featuring new works by Joanne Greenbaum and Molly Zuckerman-Hartung at NADA Miami from December 6 – 9, 2018.

Joanne Greenbaum’s (b. 1953, New York, NY) practice stretches across an array of mediums, materials, and surfaces. Primarily known for her abstract paintings, Greenbaum turned to sculpture in the early 2000s as a new way to investigate her aesthetic concerns. What started out as “notes” or “three-dimensional drawings,” as the artist describes, has developed into a full facet of Greenbaum’s vast and dynamic discipline.

Utilizing the same language of abstraction, one that balances the tumultuous with the methodical, Greenbaum’s sculptures possess a palatable energy that is unmatched. The artist takes a non-hierarchical approach to materials, utilizing marker, ballpoint pen, ink, oil paint, glaze and more to mark the sculpture’s surface—as if to remark on the intensity and immediacy of unspoken thoughts or the inscrutableness of one’s intentions.

Similarly, Molly Zuckerman-Hartung’s (b. 1975, Los Gatos, CA) work erodes the boundaries between figuration and abstraction, painting and sculpture, and the provisional and the permanent. Her unorthodox approach to mark-making, and to the construction of the picture plane, reflects on her preoccupations with the nature of artmaking itself. The pieces on display find Zuckerman-Hartung continuing to work with piecework, distressed materials, and evocative marks while also adding in screen-printed drawings inspired by, or loosely borrowed from, Picasso, Pollock, Matisse, and the cartoonist Gilbert Shelton.

The selection of paintings and prints were created this past summer during Zuckerman-Hartung’s Robert Rauschenberg Residency in Captiva Island, Florida. During her stay on the island, Southwest Florida experienced the worst “Red Tide” in the area’s history—an environmental phenomena caused by pollution that leads to marine wildlife being poisoned, paralyzed, or at its worst, killed en masse. Experiencing a personal loss of her own, in addition to processing the almost daily onslaught of global chaos, Zuckerman-Hartung made these works as a way to process events for “which one's individual grief could never be enough…for which one would have to appeal to the resources of mechanical reproduction to produce a loud-enough, a large-enough, a long-enough wailing of grief to match the mechanism of destruction.”

In addition to this focused selection, we are excited to display new glass works by Sara Greenberger Rafferty (b. 1978, Evanston, IL) from her critically acclaimed gallery exhibition Testing, along with new works by Maryam Hoseini (b. 1988, Tehran, Iran), who was recently featured in the group exhibition Body Armor, on view at MoMA PS1 this past summer. 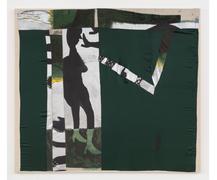