Is it true that anything can be changed, seen in any light, and is not destroyed by the action of shadows? Then you won’t mind when I interrupt you while you’re working?

Sea change. What happens to the ear at eye level? Having distanced ourselves from boredom, no longer seeking horizon, street or an idle face across a table, we are perpetually receptive. But to what? Before climbing to an altitude where all direction was lost, before drifting out from shore, before the rhythmic descent (having swallowed those four red seeds)—before all of this, Kore sat at the river’s edge and became very still, staring at her reflection in Narcissus.

Eventually we gave it a name (abduction, seduction, to be led astray, Stockholm) but before all of this, before she was stolen into and below the earth—Kore raised her eyes (the ear at eye level) to meet her own face reflected in the pupil of Hades. She was gone already.

And so the image seeks a body—not an imprint, not transference—a body that can be seen in any light, beauty at low temperature. A device lights up one side of the face only, that which is turned towards it. A device is not older than we are. So we have to stay, pursuing an image, in the off hours.

Rachel Uffner Gallery is pleased to present Off Hours, an exhibition of new work by Mary Simpson. This is the artist’s first solo exhibition in New York.

Playing off of a cultural shift from boredom to restlessness, and a retreating perspective unencumbered by devices, Off Hours is a paean to looking and gazing, to film, painting, and the supposition of objects holding onto their duration. Painting and filmmaking are two related sides of Simpson’s practice. Upon entering the first floor hallway, two 16mm films are projected—in A Feeling of If (2015), we see Jasper Johns’ Connecticut garden in a succession of meditative, drawn-out shots composed much like Simpson would frame and layer her canvases. In 10,000 Things (16mm, 2015), we’re brought into the Merce Cunningham Dance Company’s former New York rehearsal space, Westbeth, where a piano is being prepared for a John Cage score. Peripheral portraits of postmodern forebears, the space of rehearsal, arrangement, and cultivation unfolds.

Continuing into Rachel Uffner’s downstairs space, paintings on canvas and panels surround a large table in the room’s center. Some canvases are vertically scaled to one’s own body, some held heavy with impasto, others expansive and departing in composition. Attempting both image and body, the paintings use architecture, frame, structure and space to exteriorize the gaze, to take back vibration and psychological resonance. The table, inset with collage, functions as dining table and vitrine, playing with masculine and feminine forms as an impossibly flat kunstkammer for the show. 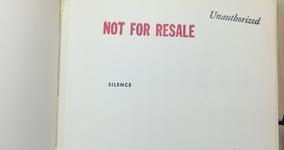 Rachel Uffner Gallery is pleased to present a reading organized by Mary Simpson in conjunction with her show, Off Hours.

Poetry is embarrassing. So, join for a short reading around a table and four corners with excerpts by John Cage, Anne Carson, Beverly Dahlen, William James and Mary Simpson. Readers are Christoph Cox, Angie Keefer and Maryam Parhizkar. Part of Mary Simpson's show Off Hours at Rachel Uffner Gallery. Reception at 6, reading at 6:30, reception continues at 7.
Read More
Art in America gives Mary Simpson, 'Off Hours' a glowing review