In his first solo exhibition within the United States, Leonhard Hurzlmeier continues his painterly examination of women and women's portraits. Under the title All New Women, he presents a selection of paintings dealing with women’s different social roles, and thus expands his thematic repertoire, which up to now has mostly been devoted to the everyday, as shown in New Women (Hubert Burda Media, Munich, DE, 2013) and Latest Women (Galerie Jo van de Loo, Munich, DE, 2015). In All New Women, a young woman on a bicycle kisses a feminist, flag-wielding demonstrator in rubber boots, while another clever jewel theif confronts a sadistic prison guard. A muscular, ragged bandy player encounters a woman in yoga position, which stretches her belly, legs, buttocks in round circular shapes.

Erotically charged images of femininity unfold in a spectrum of social realities which, not least due to the portrait of a blond man, reminiscent of Donald Trump, reflects a contemporary panorama of gender constellations. The scenes portrayed with wit and cleverly concise absurdity are less the result of a voyeuristic perspective than an attention to self-representations, roles, fantasies, and desires in everyday life, and which naturally includes the (visual) relationship between man and woman.

The artworks go beyond the narrative due to their painterly quality, which succeeds in casting ephemeral, contemporary impressions in more general forms suggestive of past artistic movements, such as Romanesque sculpture, Renaissance portraiture, or Picasso’s painting phases. The fact that the paintings are evocative of synthetic cubist works, such as those by Léger and Herbin, or pictograms and emoticons, is less due to consciously sought-after references to the 1920s or contemporary forms of visual communication, but the result of a lengthy process of form-finding.

The depicted figures are not defined beforehand and then simply executed in oil painting, but are gradually developed in several layers, which are repeatedly sanded and painted over directly on the canvas. The composition is based on complex geometrical considerations, which only allow a very limited repertoire of possibilities. Thus, the composition follows certain pre-specifications, such as recurring circular radii, fixed angles, or proportionally adjusted surface widths. The final shape is the result of a complex painterly process that aims to bring surface proportions, color distributions and surface quality in line with the motif.

This profoundly painterly concern raises the images from their illustrative function to a more general, universal level, which primarily mediates the forms. This is evident in the drawings that excite the vocabulary of abstract forms at the border with figuration. Lines, squares, and circles that become a laughing face (or not) constitute a narrow divide between pure form and concrete figure, between seriousness and comedy, between the universal and the particular. 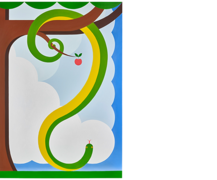 Leonhard Hurzlmeier in The New Yorker

Leonhard Hurzlmeier's solo exhibition, All New Women, is reviewed in The New Yorker.

Leonhard Hurzlmeier "All New Women" in Art in America's The Lookout

"All New Women" featured on ArtDaily