Rachel Uffner Gallery is pleased to present Controlled Chaos, a group exhibition featuring a selection of works by six contemporary artists working in abstract painting: Strauss Bourque-LaFrance, Andrea Marie Breiling, Liam Everett, Joseph Hart, Reginald Madison, and Uman. While all art-making requires degrees of preparation and deliberation, these artists pursue deeply intuitive processes in which feeling and improvisation are not stymied but rather embraced. Employing gesture, color, movement, and references to poetry, music, and cultural heritage, these artists fashion a feast for the senses, pushing the storied lineage of abstract painting in exciting and inventive new directions.

Using the techniques of a collagist, Strauss Bourque-LaFrance often layers canvas with paint, adhesives, and other materials to emphasize the tactile nature and sculptural capacities of painting. Scraps rescued from past experiments—what the artist calls “failed paintings”—are recontextualized in new pieces, adding further nuance to his compositions. Materials and images embedded in Bourque-LaFrance’s paintings originate from an array of sources—such as books, found fabrics, and studio debris—acting as keys, clues, and footnotes to the artist’s process. He often uses poetic wordplay in his paintings’ titles, inserting cultural references, psychological idiosyncrasies, and off-kilter humor alongside visual abstraction.

In each monumental painting by Andrea Marie Breiling, the viewer witnesses the artist conducting experiments in relation to her own physicality. These forms are primarily constructed using spray paint, a brush-free approach to painting which has allowed her to render large forms while maintaining the frenetic energy for which she is known. Using spray paint she builds multiple cross-hatched layers that coax new and deeper palettes and textures from this material.

Liam Everett’s abstract mixed-media paintings result from a process of steadfast and repetitious application and erasure, employing non-traditional methods to apply and remove painstakingly developed layers of paint and composition. Inspired by the dynamic alchemy of the natural environment in California, this method makes plain the interactive properties of the substances on the canvas: how they counteract, preserve, or react to one another. In this way, Everett’s investigative procedure—laser-focused on the subtle behavior of his materials—becomes akin to the scientific assaying of chemical and mineral substances in order to determine purity or the limits of stability.

Joseph Hart uses paper as an initial surface that is worked and layered with graphite, collage elements and acrylic paint, then mounted to linen and stretched over the armature of a stretcher frame. The works capture an aggregated harmony that sways between dueling sensations: measured but loose, raging and generous, awkward yet bizarrely graceful—becoming visual allegories for the complexities of life.

Infusing abstraction with more recognizable forms of representation, Reginald Madison’s paintings tempt the viewer’s will to identify forms—perhaps narratives—while scattering into improvisational mark-making. Deeply influenced by jazz and his upbringing in Chicago, Madison is moved by process and driven by instinct.

The bold gestural work of Uman is shaped by her varied migrations and encounters with cultural heritage. Exuberant, seemingly freestyle markings are influenced by the Arabic calligraphy she studied as a child. Similarly, her distorted self-portraits, and silhouette images of camels, birds and vessels merge abstraction with figuration while reflecting her East African background. Widely traveled and self-trained, Uman’s practice explores gender and cultural fluidity while remaining spiritually engaged and instinctive. 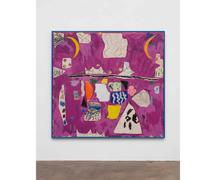