Rachel Uffner Gallery is thrilled to announce our participation in the 2022 edition of Art Basel Miami Beach. Our presentation will focus on three artists, each of whom share unique insight into their experiences with identity, intimacy and transculturalism. This intimate installation highlights large scale paintings by Bernadette Despujols, miniature dioramas from Curtis Talwst Santiago’s Infinity series, and a group of unique photographic collages by Sheree Hovsepian.

In her most recent series, Bernadette Despujols (b. 1986, Barquisimeto. Venezuela) traces the lives of Venezuelan migrants through portraiture. The series Arco Minero highlights  communities of Venezuelans who are directly affected by El Arco Minero (Orinoco Mining Arc), a government mining project that has devastated a body of land amounting to roughly 12% of the country’s territory. In 2020, the United Nations High Commissioner for Human Rights denounced the project, citing serious abuse and violence in the region resulting in the deaths of at least 149 people between 2016 and 2020.

The reference images for these works were provided by Bram Ebus, a freelance journalist, investigator, and photographer from the Netherlands based in Bogotá, Colombia. Using these poignant images, Despujols’ paintings illuminate the profound themes of home, migration, and displacement within the artist’s home country. These portraits honor the lives of those affected, allowing for quiet moments of reflection and contemplation. A portion of the profit from this series will be donated to SOS Orinoco, an organization dedicated to shedding light on the environmental and Human Rights abuses occurring in Southern Venezuela.

Sheree Hovsepian (b. 1974, Isfahan, Iran) combines drawing, photography, and collage to create dynamic constructions which emphasize the performative and bodily implications of line and shape. Much of her work centers around intimate, close-up photographs of the human figure which focus on the curves and extensions of the body. Hovsepian layers these photographs into compositions of tactile materials that abstract, obscure, or accentuate the imagery, creating a presence that expands beyond the artwork and into the viewer’s physical consciousness.

Following her inclusion earlier this year in the 59th Venice Biennale, Hovsepian continues her ongoing investigation into the process of photography and its conceptual implications. In their varied forms of expression, these recent works demonstrate the kind of material interplay and generative experimentation that occurs in the artist’s studio, which Hovsepian calls a “nest-like” site of creativity. Installed on the booth walls, the assemblages are enclosed within shadow box frames, highlighting the degree to which ‘structures’ — physical, political, and otherwise — shape one’s sense of place, and one’s sense of self.

Curtis Talwst Santiago’s (b. 1979, Edmonton, Alberta) practice explores issues of transculturalism, memory, and the contemporary Diasporic experience. He began the Infinity series in 2007 as a way to unearth and critically address histories of migration and colonialism. Initially drawn to the antique jewelry boxes for their implicit associations with trade and wealth, he quickly realized the inherent functionality of the self-containing objects. Santiago leads a nomadic life, working across the world in New York, Toronto, Lisbon, and Munich and South Africa. The carefully constructed scenes reference specific people, places and histories gleaned along the way. 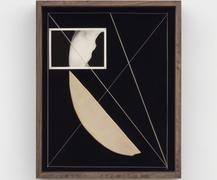 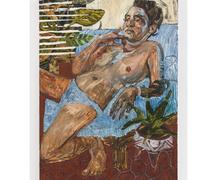