Rachel Uffner Gallery is pleased to present a show of new work by Anya Kielar. In the gallery, Kielar will exhibit a group of work that unfolds a scene of shifting vantages and palatable persuasion. Sand paintings of abstracted facial features, as well as freestanding screen sculptures draw upon such disparate sources as set design, surrealist collage, post-minimalist sculpture, and decorative arts. In the artist’s work, measured formalism is discreetly combined with theatricality to capture instances of metamorphosis between humor, beauty, and mystery.

In a series of sand paintings, Kielar creates enlarged versions of eyes, noses and mouths through an assemblage of objects on masonite boards. Using materials such as gloves, canvas, cardboard, hair, and flora to create compositions that are encased in pigmented sand, she forms mask-like objects that are startlingly colorful, grotesquely outsized, but also, in their way, things of aesthetic resonance. Each of these painted abstractions gives off both the weight of an archeological relic and the ephemeral energy of a fleeting arrangement. And once viewed as a group on the wall’s “face,” these features become recognizable members of a simplified, albeit eccentrically hewn, alphabet. The characters they resemble are likened to the esoteric symbols seen in ancient imagery to convey a broad range of emotion and meaning.

In Kielar’s screen sculptures, the interplay between figuration and objectification becomes more pronounced. Reminiscent of stage sets, these screens incorporate rather than provide a backdrop for an unknown narrative. An arm reaches across a landscape; a swirl of twigs represents the sun; and painted egg trays depict protruding boobs. Using a number of methods Kielar invites the viewer’s eye to engage in a sequence of color, surface, light, shadow, pattern, and form. As these various components are placed throughout the gallery a more expansive vision of the avant-garde becomes apparent. In this imagined place creativity is suggested to be a concentrated force of immense potential.

Anya Kielar has exhibited solo projects at Daniel Reich Gallery, NY and Casey Kaplan, NY, and has participated in group shows at 176, Zabludowicz Collection, London, Guild & Greyshkul, White Columns, and Museum 52 in NY. She received her MFA from Columbia University, and lives and works in Brooklyn. 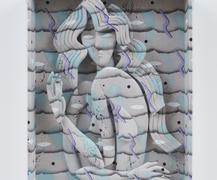